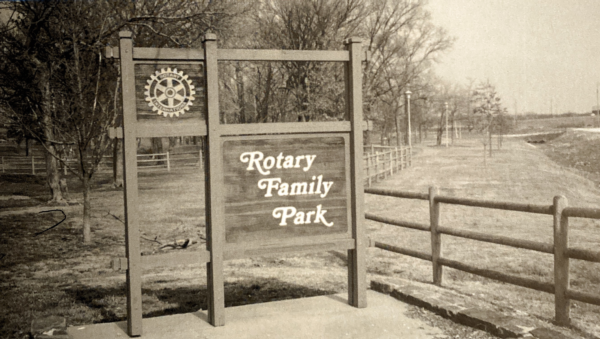 1984-85 - Club members began exploring additional ways to serve the community and a fitness trail was chosen as a viable project. Willard Walker suggested the Club coordinate the project with the City.

Don Tyson donated 40 acres of land. Willard and Pat Walker donated an additional 30 acres, and 70 acres were available for a park. In the Fall of 1984, the City Council accepted a plan to use 58 acres for youth and adult recreation fields, and 12 acres which Rotary would develop into a Family Park. The Club later purchased an additional 5 acres for the Family Park.

The City of Springdale committed over $2,000,000. The Schmieding Foundation and the Tyson Foundation contributed generously for concession stands and tennis courts. Gerald and Marge Tweedy gave over $100,000 to begin Rotary Park. The Club invested over $300,000 in the park. Gerald Harp gave the handicap accessible playground in memory of his late sister, Judy Harp Van Hoose.

Finally, it was ready, and officially dedicated on Labor Day, 1990.

“Dreams do become reality! If you don’t believe it, drive out to the Park and see the results. I hope that as far as our Park is concerned Rotary will continue to dream and that years from now Rotarians will be working on a beautification project for the park. While working on these new projects, they will undoubtedly pause and read the names of the Rotarians that dared to dream years before and made this dream a reality.” Don L. Gibson, Park Project Co-Chairman, May 2, 1990.